From Sedentary to Triathlete

“I was not much of an athlete during my teenage years. I only got fitter after I got enlisted into the Commandos. However, after I left the army, my weight ballooned from 68kg to 86kg!” quipped Jonathan as he shared his story with us.

After leaving the army, Jonathan led an unhealthy lifestyle which was filled with smoking and drinking.

“I was a heavy smoker that went through 40 sticks a day, with an average of four days of drinking at pubs per week,” Jonathan recalled. Coupled with the lack of exercise and an unhealthy lifestyle, Jonathan struggled with cough every morning and constantly felt tired.

“I rarely slept more than six hours each day.”

Diabetes, lung related illness and cardiovascular failure were amongst the few things Jonathan feared: “I was worried I might just drop dead while holding a beer glass in my hand.”

Growing up in a family with siblings who were on average ten years older, Jonathan found himself alone most of the time, which resulted in him picking up bad habits from his peers.

“But it was also through this solitude that I developed an independent mind-set and determination to strive for things I want to achieve, making vast impacts on the decisions I made in my adult-hood,” he added.

Struggling to look good in size 36 pants and seeing himself in the mirror every morning with his double-chin reflection and imagining it saying ‘Hi fatty bomb bomb, good morning’ pushed Jonathan for a change. Deciding that enough was enough, Jonathan decided to start running.

“My wife could outrun me with one eye closed! Which made me realise, I did not want to be defined by this unhealthy state that I was in.”

Having a competitive nature, it pushes Jonathan to train constantly. Other than that, it was the food that he could indulge in after exercising that kept him on this journey. On a weekly basis, Jonathan’s routine now consists of working out six days a week; with four double sessions of cycling and running, averaging 14 hours each week for his workouts.

“Saturday is usually my brick session, where I head out for my run immediately after my bike ride,” he enthused.

Time was a challenge that Jonathan faced.

“No matter how well you plan it, you will never be able to strike a balance in the sport you desire, the family you love and the pursuit of your career,” Jonathan lamented.

In 2017, while training for his first Ironman, Jonathan had to get up before his family to complete his rides and go for his runs in the evenings. Even during the weekends, most of his time was spent on training rather than family outings.

Besides being constantly hungry, Jonathan had his fair share of crashes while cycling; breaking his little finger during a race, crashing when a vehicle exited a roundabout without noticing him or sliding over an oil patch while cornering; Jonathan continues on his journey.

Till date, Jonathan has completed marathons, Ironman (70.3) and full Ironman races, with Ironman Gurye Korea 2018 and Ironman Langkawi Malaysia 2018, being the most memorable ones.

“It was my 2nd Gurve, and the race date was on my actual birthday! I had wanted it to be my best timing by going under 11 hours. I put many hours of training into it. Unfortunately, I was down with viral infection and due to my hectic work schedule, I was not able to recover in time. Fever kicked in around the 30km mark during my run and I had to drag myself to the finish line!” Jonathan shared.

“In Langkawi, my friend and I made the poor decision of eating at a roadside stall the night before the race, which resulted in both of us having food poisoning. I was semi-conscious while running. When I had finally completed the race, I was brought to the medical tent where I laid down for more than an hour while consuming various medications,” he added.

According to Jonathan, as important as it is to train hard, it is equally important to give your body a break and remember you are in this because you want it and not because of anyone else. It is important to take your time, and gradually increase the training load. He went into triathlon too fast with no proper guidance and trained too furiously. As a result, he constantly broke down due to illness.

Jonathan feels that people tend to be too anxious to see results, and when they do not, they start losing motivation. With every journey, it requires perseverance and determination, which can be achieved through proper planning and setting milestones.

When asked what advice he had for folks out there who are keen to make a change, Jonathan said: “Join a group, set realistic goals and if possible, grab your spouse or family to start this healthy journey. Start with an easy plan and when you are able to complete it, slightly bump up the training a little and repeat the process. No matter what happens, just keep doing it and you will be surprised at how much you are able to achieve.” 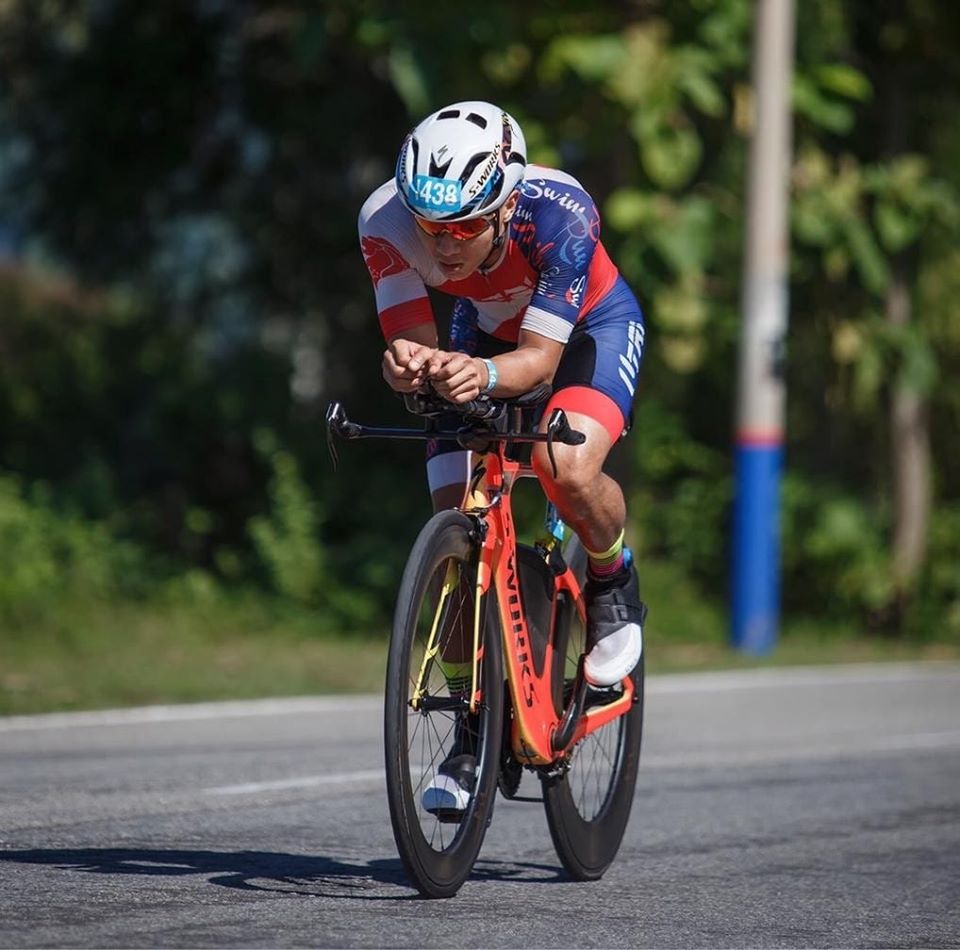 For now, Jonathan has decided to stop doing full distance Ironman races due to the time required to train, but rather spend more time cycling and competing in key cycling events that he has always wanted to take part in.

“This sport and lifestyle is now a part of me, and I hope to still be able to race when I am 70 years old,” he said with a wink.

Faith – To have faith in themselves that if they persist, they will be able to achieve anything

Love – To love the sport and not the results

Consistency – No matter what happens, just keep doing it

Gaining confidence and paying it forward