As parents, we can’t help but fuss over what our children eat when they first start out on solid food. However, we tend to monitor less as they get older. After all, there are more pressing concerns like academic performance and social habits to focus on! The truth is that poor nutrition in teenagers can have a sizeable impact on things such as schoolwork, self-esteem, daily well-being and even mood. Neglecting your teenage child’s diet can be a dangerous mistake that leads to physical and mental repercussions. 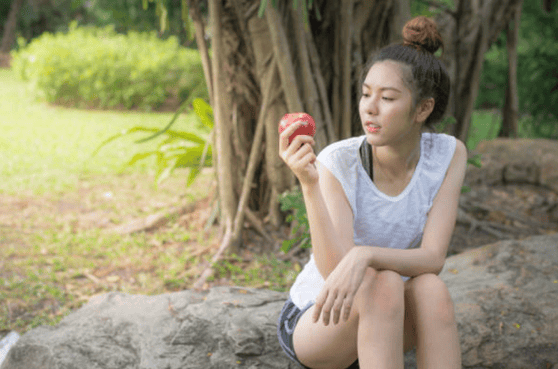 Teenagers tend to have enough on their plate, to the point where eating healthily is usually one of their least important concerns. Without supervision, teens tend to gravitate towards bad dietary habits due to the lack of restrictions or better alternatives, feelings of stress, peer pressure and issues concerning body image. “Teenagers tend to be highly conscious, which makes them particularly vulnerable to body image issues. It is helpful for parents to have a non-judgemental attitude around body size and food selections," says Ang Sin Hwee, Associate Sport Dietitian at Singapore Sport Institute.

Teenagers tend to make bad food choices because they choose what’s yummy or convenient rather than what’s actually good for them. Soft drinks are one of the biggest culprits of excess sugar consumption amongst teenagers, partly because they're so widely available. Following a healthy and balanced diet is also hard for teenagers because many don’t know what type of food they need, and in what amounts. Without guidance, it can be hard for a teenager to gauge how much dietary fibre or protein they need to consume. Furthermore, it’s hard for them to pick the healthier choice between food options such as refined grains VS whole grains due to an inherent lack of information.

General guidelines suggest that moderately active teenage boys should consume about 2,200 to 3,200 calories per day, while girls should aim for 2,000 to 2,400 calories. In truth, the actual number of calories your teenage child requires depends on their weight, age and level of physical activity. However, overeating can be a problem when meal portions are not regulated, especially since stress-eating is very common in teenagers, who tend to be sensitive to their environments. More teenagers are also eating out and putting themselves at a higher risk of overeating than when they eat home-cooked meals.

Conversely, teenagers are also susceptible to unrealistic body image issues which leads to an unhealthy preoccupation with weight or body composition. In 2016, the Singapore General Hospital saw 170 new cases of teenagers with eating disorders. To control their weight, these teenagers would reduce their food intake drastically or even resort to inducing themselves to vomit after meals or consuming diet pills/laxatives to lose weight. The scary part? These eating disorders are not always “just a phase” – some research studies have found that these habits follow teenagers into their adult years, with the risk being higher if these habits were developed when they are younger.

What poor diets do to a teenager’s body 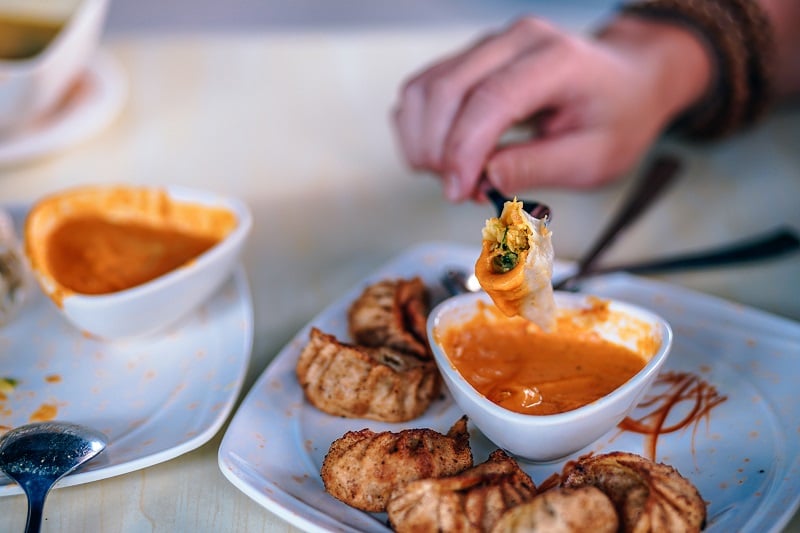 Aside from weight issues, poor diets deprive your teenage child of essential nutrients that contribute to their growth and development. Aside from starving the body of energy and nutrients, eating disorders have unique effects on a teenager’s body due to their body still being in a state of development. Diet pills and liquid mixtures aimed at substituting food are often uncertified by doctors and can lead to organ damage. Self-induced vomiting can cause bleeding and ulcers in the oesophagus as stomach acid is highly acidic and also damages the teeth.

But the most shocking long-term health impact of poor diets is that it may possibly cause an early onset of type 1 and type 2 diabetes in teenagers and even children. A 2017 American study found that the number of youths with type 1 diabetes was increasing at a rate of 1.8% per year, while that number for type 2 diabetes was at 4.8%. Although the reason remains unclear, this statistic is something worth being concerned over, given that Singapore is the country with the second-highest proportion of diabetics, right behind the US.

Scientific research by Deakin University recently proved that poor diet is linked to mental health issues such as depression, which manifested as behavioural problems in the teenagers observed. Such mental illnesses could ultimately be detrimental to a teenager’s performance in school, especially since academic-related stress in Singapore is extremely high.

Realistically speaking, most of us cannot expect our teenage children to actively pursue a healthy diet when healthy eating isn’t emphasised at home. This is why parents need to step in and play an active role in changing their child's nutritional habits for the better. You can do this through a mixture of subtle and obvious motions; the important thing is to keep at it because healthy eating habits won’t stick around if they aren’t supported by consistency and motivation. 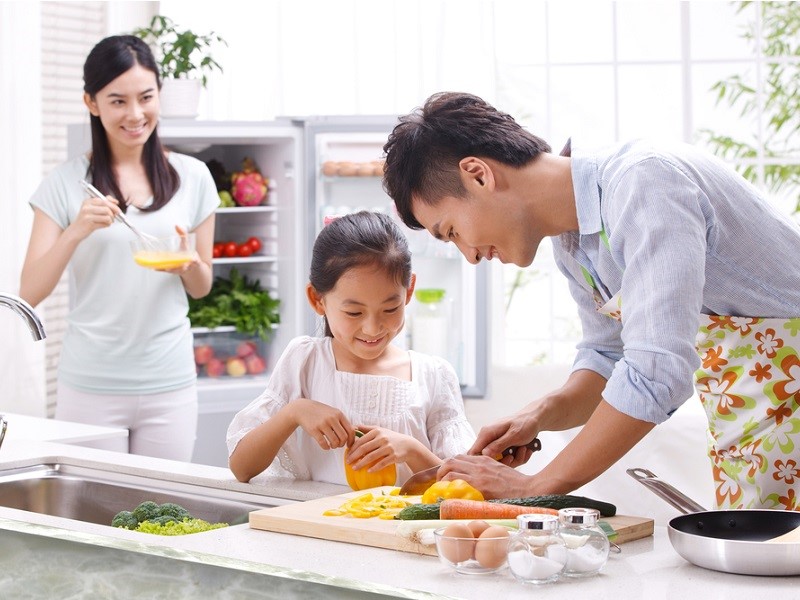 • Re-arrange the contents of your fridge and kitchen cabinets

If you want your teenagers to eat less junk food and snacks, you have to make them less accessible – hide these unhealthy snacks at the back of cabinets and load up the fridge with ready-to-eat healthy snacks. Put pre-washed, pre-cut fruits and veggies at the front of the shelves so that they are the first things a hungry teenager’s hands will land on.

• Take them on a grocery-shopping learning journey

We usually bring our kids to places like the zoo, fish farms and nature parks when they are younger so that they can learn more about the world around them. Why not take them grocery shopping with you so that you can teach them how to make the right choice when it comes to selecting food? Show them how to read nutritional labels and what healthier alternatives to their usual snacking look like.

Cooking with your teenage child is not only an opportunity to bond and spend some quality family time together, but it’s also a great chance for you to drop some nutrition knowledge bombs! You can gradually involve your teen in this process by regularly asking them what kind of vegetables they want for dinner, or what they want in their soup.

“Cooking at home allows you to have better control over what you and your child nourish your bodies with, as compared to eating out. It is the best opportunity to introduce whole grains, lean proteins and colourful vegetables and fruits for well-balanced and nutritious meals,” says Ms Ang. “It is also a good way to introduce variation in the diet – By featuring different types and colours of vegetables through the week, parents can expose their child’s taste buds to a variety of taste, texture and nutrients.”

Unlike younger children, teenagers won't just blindly listen to and follow what their parents do, but your habits will definitely rub off on them (given enough time). Keep up the healthy eating habits whenever you’re at home or eating out with them and they will slowly but surely begin to internalise them. According to Ms Ang, such instances of role-modelling are powerful tools when it comes to parenting in a non-confrontational manner.

We’ve all heard the saying that breakfast is the most important meal of the day, but how true is that? A recently published Swedish study has found evidence that good breakfast habits have long-term effects on health, ergo teenagers who eat healthy breakfasts daily are healthier as adults. There’s a lot to gain from the simple act of eating breakfast: it helps to regulate blood sugar levels, fuels a healthy metabolism, helps with weight control and puts one in a better mood. These are benefits that everyone and not just teenagers can enjoy!

A common worry that parents have is when they should talk to their teenage children about the birds and the bees, but many don’t feel the need to talk to their children about body image issues. Eating disorders are one of the most serious health-related problems a teenager can face, so it’s essential to sit your child down for a face-to-face, serious talk about such matters.

The tricky thing is that with social media being so widespread, it has become too easy for misinformation to be propagated. Your teen may be confused and end up choosing to go with what's popular instead of what's healthy; it's your duty to preempt this situation by laying out the bare facts before them. Eating disorders stem from self-esteem issues, so resolve these before the symptoms set in because an unhealthy mindset can last for years, even all the way up to adulthood. 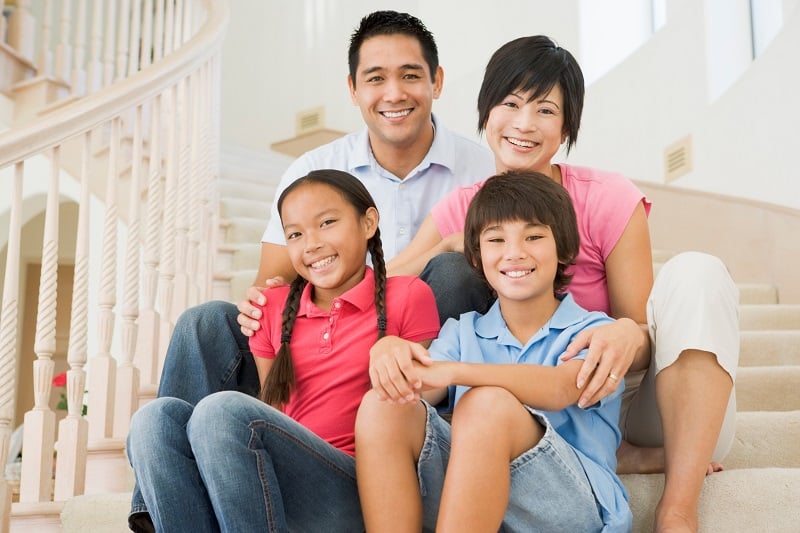 Granting more independence to our children as they grow up is a normal process and should be encouraged, but they need to be groomed for this eventuality in order to minimise the risk of them going off the rails. Good eating habits should be ingrained at a young age so that they can follow your child throughout his or her life. Instilling these habits don’t have to be a forceful affair – introduce them gently and use them as opportunities to connect and bond with your child on a deeper level. Most importantly, healthy eating isn’t only a teenager-centric issue, it’s something the entire family should strive towards. At the Active Health Labs, you can count on reliable support and advice.

A Healthy Gut For A Healthier You