“While driving to work one morning, I suddenly felt this sharp pain on my right leg. The pain was so numb that I almost couldn't step on the car brakes, and that really freaked me out. I went straight to a clinic to get my leg checked out, and the doctor immediately referred me to the A&E for an injection, as he suspected the numbness in my leg could have been caused by my bodyweight pressing down on the nerve on my backbone that’s connected to my knee.” Jason recounted that faithful day he had the health scare of his life.

Like many high flyers during their prime, Jason’s career as a program manager was taking off. However, his hectic lifestyle took a toll on his body, and his weight ballooned to 102kg without his realization.

“I used to weigh around 90 to 100-plus kg, so I was already overweight to begin with,” Jason admitted.

“And after I got married, things started to get worse. I was often stationed overseas and pulling a lot of late night shifts, and I had to shuttle to and fro locations for my business trips... there was a lot of drinking and entertaining as well.”

TRY: 60-Second Exercises that you can do anywhere

“The doctor gave me two options: Either I undergo a minor surgery to check the fatty liver, or I start to exercise and undergo a strict diet and nutrition plan. I chose the latter.”

Jason kick started his journey to better health by participating in the Health Promotion Board’s Lose To Win Season 4 in 2012, where he attended community workouts at the Sports Hub two to three times a week or trained on his own at a gym near his home. He also cultivated good eating habits from a nutritionist that was attached to his group to help him manage his diet and learn more about healthy cooking and nutrition. Jason’s commitment to turn his life around paid off in a big way.

“Exercise has helped me to stay more alert, feel less lethargic and look refreshed! I’ve lost weight, am more toned and shaped up, and I’m 1 to 2 sizes smaller! I’ve had to give away a lot of nice and branded extra-large sized polo tees that I bought in the US on my business trips!” he declared proudly.

Along with his new image, he has also discovered a passion that complemented his new zest for life: challenging himself to go the distance. 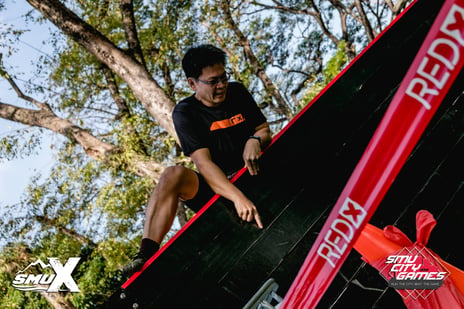 Since embarking on his quest for fitness, Jason has participated in various marathons, such as the 2XU Compression Run, Sun Down Marathon and Safra Singapore Bay Run and Army Half Marathon, among many others. In 2019, he ran the full Marathon for the Standard Chartered Singapore Marathon and completed the 32km The Most Beautiful Thing (TMBT) trail race in Borneo, only to dive right into another adventure.

“The day right after TMBT, I went and conquered Mount Kinabalu! It was an amazing experience which tested my endurance and pushed my body to its limits.” he mused.

Jason’s story has inspired his loved ones to make a lifestyle change along with him. Since graduating from Lose to Win, his wife who has seen the positive effects on Jason, has followed in his footsteps and is now his regular exercise and running partner. Jason has also been encouraging and motivating other family members to embrace his lifestyle, and his ambition to conquer greater distances continues to grow. This year, he intends to take on the 90km Four Feather Ultra Trail Marathon, followed by the 50km Ultra-Trail Australia marathon, and to have his ‘revenge race’ for the 60km CULTRA2020 and the 60km Perak Taiping MMTF.

Despite overcoming harder challenges along the way, Jason feels that the most difficult obstacle for people lies in taking the first step.

“Don’t think so much and say it’s too tough for you or that you can’t do it. Just drag yourself outside and start on something simple, even if it’s just walking! No matter how hard or tedious the process is, once you commit to change, just do it and don’t look back. You’ll be surprised with the end results, trust me!”

Jason’s fitness mantra is to “live better, stronger, every day”, and he most certainly walks the talk. In the pursuit of a healthier and richer life, he is excited about his future and looks forward to the road that lies ahead.

Jason currently trains with the Superfit community. He attends their free programmes at Sport Hub on Thursdays and Saturday, and SuperTrail runs that happen twice a month. Check out @Superfit.global on Facebook for more details.